This week's soundtracx presents an oldy but a goodie from this Dublin band's best selling album. Seen most frequently at the Star in Swords or at the Rose and Boot in Malahide, Sultans of Ping lyrics bounce off Dublinism's and ideomatic dialect, but echo true of the Irish scene (of which they are a part/Pogues/AfroCelt/etc.). Where's me poxy jumper!

Email ThisBlogThis!Share to TwitterShare to FacebookShare to Pinterest
Labels: Soundtrack for a Revolution 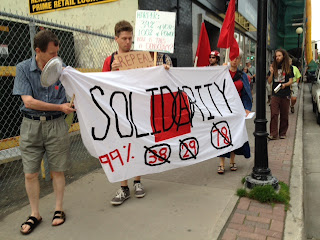 The group marched up Water Street to show solidarity, first of all, with the student (and now popular) movement in Quebec, and as a way to show popular discontent with a slew of undemocratic laws at the provincial and federal levels: Loi 78 in Quebec makes it illegal for groups of more than 50 to peacefully assemble, Omnibus bill C-38 (recently passed by the Conservatives) represents the most dangerous disregard for people and the environment we've seen in a long time, and Newfoundland access to information Law 29 (read more about it here, here, or here) hinders the public from accessing information. 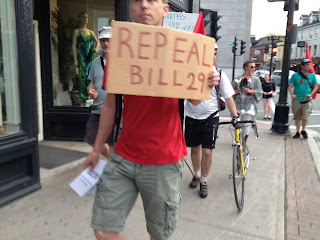 There are so many reasons to be angry, and so we invite the public to gather peacefully with us next Wednesday at Harbourside Park at 8 pm for more discussion, marching, and pots and pans clanging! 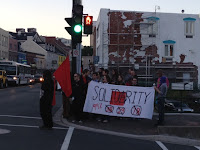 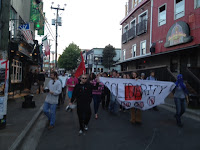 I've put together a pamphlet explaining Bill 29 (available here).  Nice to have on hand if you are collecting signatures for a petition.  Comments are welcome. 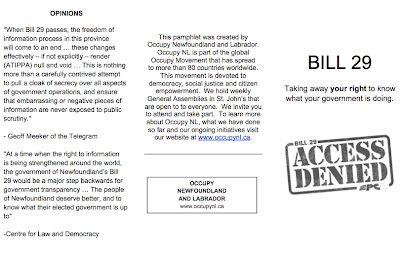 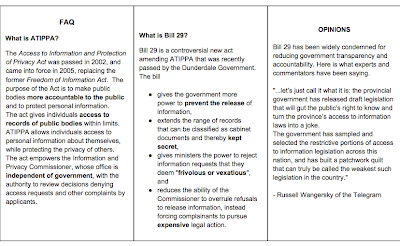 The NDP are circulating a petition calling for the repeal of Bill 29.  An electronic version can be downloaded here.  In order for the petition to be accepted, all signatures must be in the original ink and each page submitted must have a minimum of three signatures on it.   Signatures should me mailed to the address at the bottom of the page, or sent to one of the NDP MHAs.

Remember, petitioning gives you the opportunity to engage the members of your community on this important issue.  The more people know about Bill 29, the less likely they will tolerate this attack on our right to know what our government is doing.

Video: Highlights from June 22 Casseroles in Montreal (at the end, promising to come back July 22 for an even bigger show of solidarity!)

Close to a hundred people turned out on a cold and windy June afternoon in Support of Access to Information.  Check out this lead story on CBC (unedited footage here), some videos shot by Jennifer McCreath, and photos taken by participants. News coverage links below. 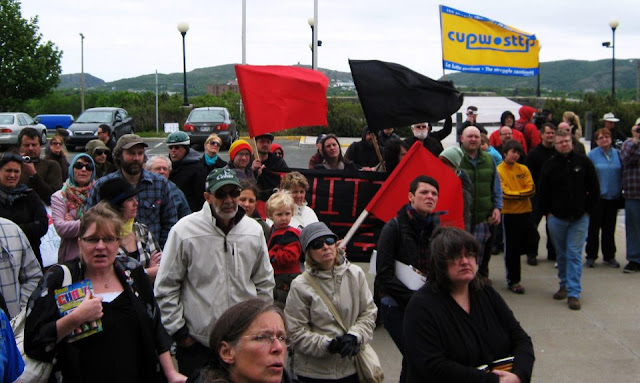 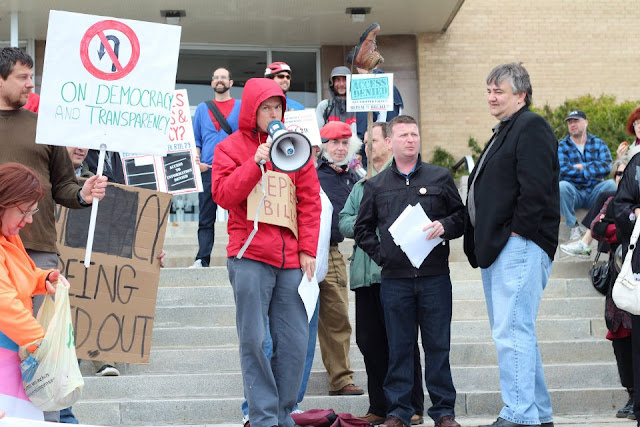 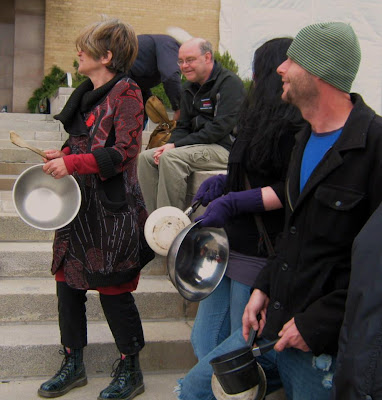 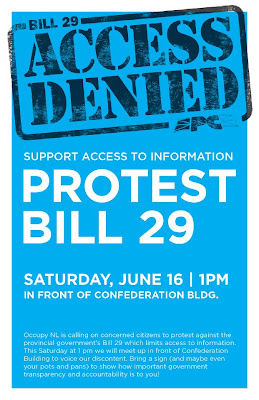 Occupy NL is calling on concerned citizens to protest against the provincial government's Bill 29. This Saturday at 1 pm we will meet up in front of Confederation Building to voice our discontent.  Bring a sign (and maybe even your pots and pans) to show how important government transparency and accountability is to you!

Since the epic concert de Casseroles video that went viral on May 24, the rest of Canada has stepped up to show solidarity with the students in Quebec (and a broader popular movement of citizens concerned about the draconian and far-reaching "loi special" Law 78).

Solidarity march making it's way to the banks...

St. John's citizens made themselves heard on the first Casseroles Night in Canada on May 30, and are invited to meet up at Harbourside Park for round two on Wednesday June 6th around 8 PM.

People of all ages are welcome!

Bring your pots and pans, and something to hit them with! If anyone has any suggestions as to how to make this event bigger and better, please share in comments.

Leave your house at 8pm and clang your way down to Harbourside Park. Hopefully the noise will attract others to join in! When we get to the park, keep making noise and see how big of a crowd we can gather!


The news source Rabble.ca has called for weekly Casseroling to continue showing solidarity with the student movement in Quebec and disapproval for Quebec's Law 78, which restricts Canadian's civil liberties, but to also make our discontent over Bill C-38 heard loud and clear. Let those in power know that Canadians are paying attention!

Members of Occupy NL have also created a postcard (front and back downloadable from that link) that you can send to your MP about the ominous, undemocratic Omnibus bill C-38.

Black Out Speak Out June 4th Against Bill C-38 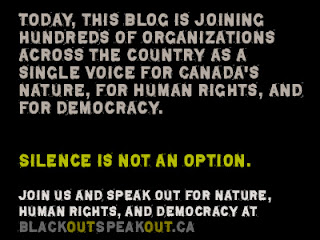 Join local Newfoundland and Labrador environmental community organizations for a press conference to be held on Monday June 4 at Harbourside Park at 10 AM. It is part of the broader Black Out Speak Out campaign being organized across the country in opposition to the omnibus Bill C-38, (a 425-page bill being rushed through Parliament), which would weaken many of the country's most important environmental protection measures. Read more about specific reasons the bill is undemocratic and destructive on many fronts.

View the Top Five Reasons to Speak Out and download a top ten list (from the Black Out Speak Out website) for more info.
at 6:54 PM 2 comments: