** UPDATE: Nov 5th —We will be continuing our organizing at the GA tonight as well. 7 pm. Harbourside Park. Join us!

We will be discussing direct action on Muskrat Falls at our General Assembly tonight (Tues Oct. 30) at Harbourside Park at 7 PM. This is not about pro or con Muskrat Falls. This is about political process and civic engagement.

We are calling for an NL People's Assembly on principles of direct democracy to address shortcomings of a top-down political system.

Now is the time to reclaim the power of the people. Rise up NL!
---

Check out some of the other Muskrat actions in Labrador. 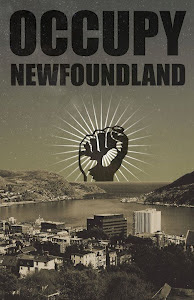 The Canada-China FIPPA (Foreign Investment Promotion and Protection Act) was quietly tabled in the House of Commons on September 26th. This was the first time anyone got a chance to see the full text of an agreement that will be automatically ratified after 21 sitting days without any parliamentary debate or vote.

FIPPA will bind municipal, provincial and federal government for the next 15 years to terms that have been shown to favour Chinese investors rights in ways that infringe on Canadian sovereignty and democracy. Even if a future government wanted to cancel the treaty, a one-year notice is required, and then after the cancellation the treaty guarantees another 15 years of treaty benefits to Chinese operations in Canada.

The 4 O'Clock Whistle—Call for Submissions for 5th issue!

The 4 O'clock Whistle, The Bay of Islands Free and Independent Magazine is currently looking for submissions for the 5th issue of their publication from members of the student/worker community of Newfoundland and Labrador, Atlantic Canada, and beyond.

Check out issues #1 and 2! And the latest issue here!

Submissions could include writing, art, and journalism (but are certainly not limited to these mediums). All articles and artwork submitted would be published under a creative commons copyright and would be distributed free of charge to locations around The Bay of Islands. (A note: They will do their best to publish submissions, though please be advised that they do not publish pieces that are racist, sexist, LGTBAQ phobic, or that promote hatred towards groups of people or individuals, and what they choose to publish remains at their discretion).

The 4 O'Clock Whistle accepts work written under pseudonyms and will do their best to protect the identities of authors who wish to remain anonymous.

The deadline for submissions to the 5th Issue is November 30, 2012.

To submit work email them at: [email protected]

I mentioned in the previous post that the larger provinces tend to have smaller percentage of people working in the public sector.  I want to return to that point because I think it is the main reason that NL has a relatively large public sector. 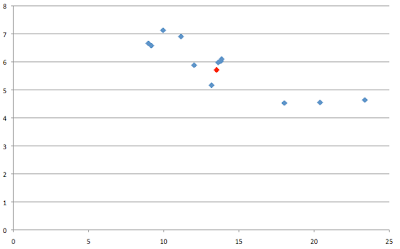 There is a very clear trend: the larger the province or territory, the smaller the share of public sector workers.  The four dots in the top left are the four big provinces: Ontario, Quebec, BC and Alberta.  The three dots to the far right are the territories.  I've marked NL in red.  While it is true that the red dot has been creeping to the right over the last 10 years, it still remains well within the norm.
at 12:16 PM No comments:

A followup to this post can be found here.

This post was inspired by the terrific NL politics blog Labradore.  A few months ago, he posted a chart (reproduced below) showing provincial public sector employment as a share of total employment. 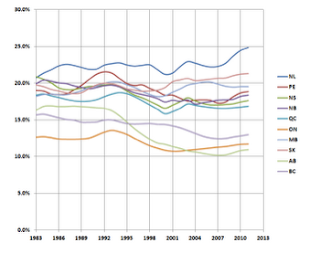 This was meant to demonstrate that the provincial public sector in Newfoundland is unusually large and growing rapidly.  I accepted this conclusion on first reading, but today when I happened upon the post a second time I started to wonder.  Since so many public services go to the elderly (healthcare) and the young (education) who are not normally part of the workforce, isn't it more appropriate to compare public sector employment to the population, rather than to total employment?

So here is what I found.  The following chart shows public sector employment (minus federal general government and federal government business enterprises) as a percentage of population.  Note that the time period is reduced because the data I used only goes back to 2001. 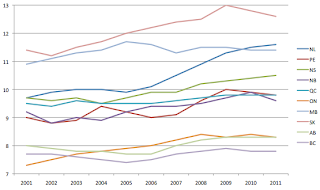 Another reasonable measure is public sector wages as a share of GDP.  Here is the chart. 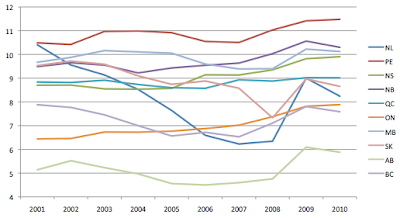 By this measure the NL public sector dropped from the highest to the second lowest, before climbing back up to the middle of the pack (update:  This is due mostly to the recent economic boom that has driven up GDP.  Public sector wages have actually been rising in real terms).

Together, these charts tell a different story than the one told by Labradore.  The public sector has certainly grown over the last decade, but we have also become wealthier as a province so we can afford to spend more on public services.  If you compare us to the other five provinces with populations under 3 million we seem to be about average.

On the whole, I think it is reasonable to argue that the public sector may be growing too quickly, but it certainly isn't scandalously large by national standards. 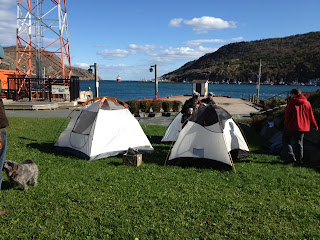 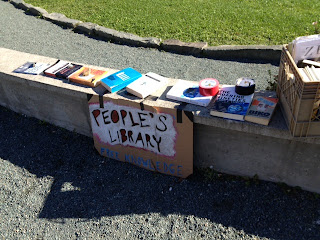 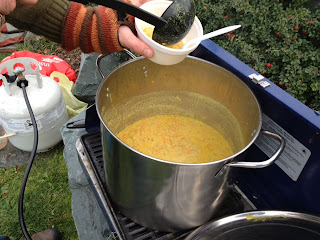 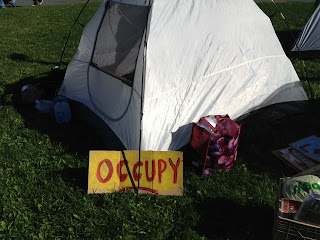 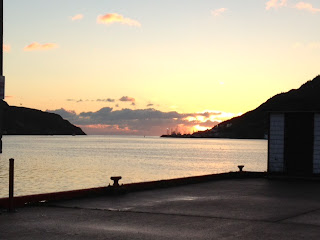 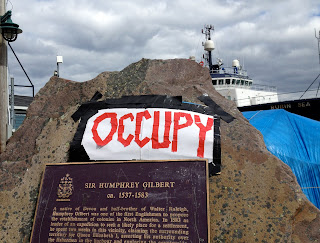 
This October 14-15, come celebrate our 1-year anniversary and reflect on how far we've come as a movement, and what's to come. Make some noise. And bring your tent.
at 2:46 PM 2 comments: 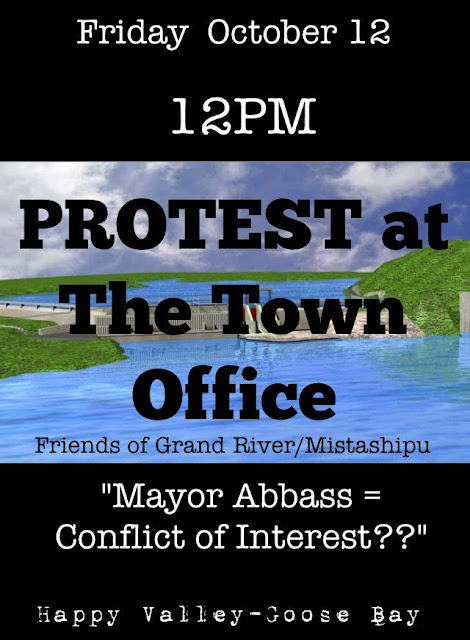 Friends of Grand River/Mistashipu (FOGR/M) have requested that Mayor Abbass and the Town Council of Happy Valley-Goose Bay hold a public meeting to explain to its residents how there is no conflict of interest in relation to the mayor’s various positions. In addition to Mayor Abbass’s appointment to Nalcor’s Board, he has also publicly taken the stand with Peter Woodward’s pro Muskrat Falls business group.

We at FOGR/M are concerned about the adjacency principle and lack of consultation since the mayor’s appointment to these groups. We are further concerned about how all residents are being represented as plans move forward. Many of us in FOGR/M are residents of Happy Valley-Goose Bay and do not feel represented, consulted, or considered as he takes such a vocal public stand for the project.

FOGR/M will be continuing protests at the town office until we feel these concerns are being publicly addressed. A letter will also be presented to the Town Council on October 12, 2012 requesting the same. It is our position that a well-advertised public meeting called by the town council would give ample opportunity for all residents to come and understand how these various positions do not put the mayor and town council in a conflict of interest in representing all of the electorate.

Friends of Grand River/Mistashipu believe in a common mission, to protect and preserve all Labrador Rivers, including our efforts to Save Muskrat Falls! FOGR/M believe this government proposed megaproject to create a hydroelectric dam at Muskrat Falls that will eventually lead to potentially damming of other Labrador rivers is wrong, our reasons are varied, still the end decision the same - it is not a healthy project for anyone involved. FOGR/M are committed to stopping it! Search us on Facebook for more information. 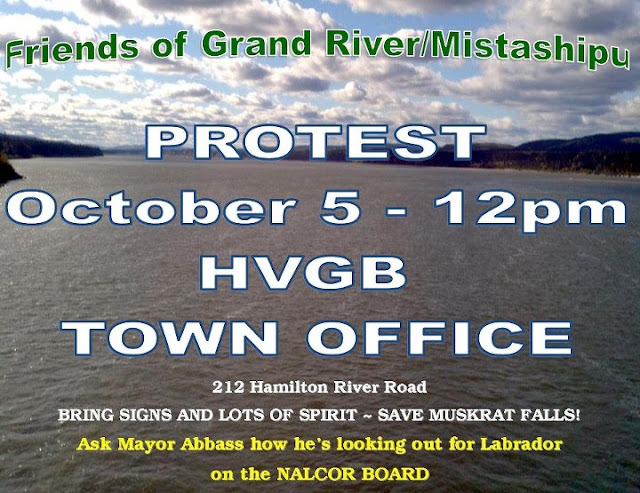 via Friends of Grand River/Mistashipu

Friends of Grand River/Mistashipu would like to invite you to

to join us in protest of the Muskrat Falls Hydro Project.

We are all aware that Happy Valley-Goose Bay Mayor Leo Abbass is now a NALCOR Board Member, and we'd like to hear from him and how Labrador and his community is going to benefit from this project in the long run? How is he looking out for the interests of the Labradorians and residents who elected him? And why has he made no public presentations to inform us of why he's on this board, what this project will mean to all of us, and will he allow us any input at all as this moves forward!?

Read more at the Facebook Event Page
at 12:23 AM 4 comments: