May Day saw huge protests around the world -- Occupy Wall Street and Occupy.com have great coverage of U.S protests. This Global May newsletter will get you up to speed on May Day and other upcoming May events worldwide.

Here's the CBC's coverage of the May Day protests across Canada. Occupy NL also participated in this Spring upsurge of people power, of momentum towards the global change we so desperately need.

In Response to "De-Occupy NL"

On Saturday, March 31st, the Telegram received a letter from J.F. Martin, accusing the city of having "shirked responsibility" by not evicting the Harbourside Park camp sooner. The letter was read verbatim on the St. John's Morning Show today, followed by an interview with Deputy Mayor Shannie Duff, where she suggested that the movement was nothing more than an “informal camp,” rather than a part of a global movement.

We would like to address some of the confusion surrounding our organization. First of all, OccupyNL is not a camping expedition. OccupyNL is a local manifestation of the global Occupy movement. The encampment at Harbourside park is an important meeting place and symbol for our movement, but it is but a small part of the whole. We are a community of concerned Canadian citizens who are determined to change our society for the better. Our organization seeks to achieve this goal by way of its unique structure: completely horizontal consensus-based decision-making, where everyone has an equal say. Our specific goals are decided upon at our weekly General Assemblies, which are open to the public.

Mayor O'Keefe and others have been calling for a "new fiscal arrangement" with the provincial government.  It is easy to get cynical about politicians fighting over tax revenue: they want credit for spending, but don't want to get blamed for tax increases.  But the mayor's proposal has merit as a means of reducing income inequality.

Open the House (the return)

The provincial government says that it has no legislation to pass and that the House of Assembly is dysfunctional, so they see no reason to have the house in session. But in an open and transparent democracy, our elected officials should be participating in important debates about pressing issues of the day. Occupy NL recognizes that there are a number of such pressing issues. These include: 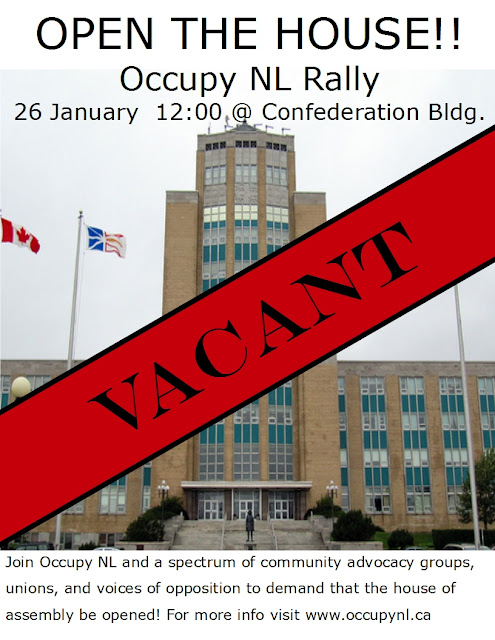 This is, of course, not the first time we have raised such concerns. Last year, Occupy NL organized a similar rally with the very same message, but it seems that the provincial government still has not gotten the memo. Join us at Confederation Building on January 26th at noon to make sure the message gets through this time!

For information and media from our last Open the House rally, click the link below:

Email ThisBlogThis!Share to TwitterShare to FacebookShare to Pinterest
Labels: change, march on confederation, open the house

They are striking over pension reforms and the strike was 2 million strong.

Check out coverage by The Guardian.

The BBC also has an article on the days events and offers key points on the national strike.
at 1:24 PM No comments:

Part of this post was transcribed from the webpage of razorbill press. Anyone interested in joining a working group on political/electoral reform is encouraged to join the facebook group or contact us at [email protected]


We lurch from crisis to crisis, rarely noting that we attend to the details of each crisis, but ignore its fundaments.

How the Occupy movement is already changing everything

Via Yes Magazine
1. It names the source of the crisis.
Political insiders have avoided this simple reality: The problems of the 99% are caused in large part by Wall Street greed, perverse financial incentives, and a corporate takeover of the political system. Now that this is understood, the genie is out of the bottle and it can’t be put back in.
2. It provides a clear vision of the world we want.
We can create a world that works for everyone, not just the wealthiest 1%. And we, the 99%, are using the spaces opened up by the Occupy movement to conduct a dialogue about the world we want.

We Are
your customers
your friends
We Are
citizens and neighbours
We Are
sites
and situations
We Are
gatherings
and assemblage
Read more »
at 12:07 PM No comments: