Come out to the second screening of the newly formed Cinema Politica St. John's on May 21! Every third Tuesday of the month throughout the summer our local Cinema Politica will be screening a hard-hitting documentary not promoted by mainstream culture.

“THE STUDENTS FIGHT BACK”

A 4 O’clock Whistle Documentary on the Recent Cuts to the College of the North Atlantic and the Student’s Response:
Including In-depth Interviews, Rally Footage, and Personal Messages from Students and Concerned Citizens

Something to Consider: "Capitalism is the Crisis"

Because you surely shouldn't believe absolutely everything that you hear, see, or read, here is something for you to consider. It's a documentary that discusses capitalism, the 2008 financial crisis, and government responses to the crisis, which have tended to focus on cutbacks in spending (though this has been the direction of politics in Britain and North America since at least the 1970s).

Not only does it offer a critical look at capitalism, it also shares some methods of resistance. The filmmakers, for example, go to the Mondragon, which is a collectively-owned and operated political bookstore and vegan restaurant in Winnipeg, Manitoba.

If this piques your interest, you can watch the film below. For more information, click here.

It's free, and the creators ask that the film be distributed. So if you like it, spread the word. 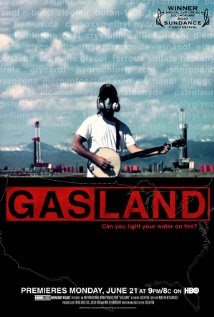 Film Screening of "The Take"

This Tuesday, March 20th, we will be viewing the documentary "The Take." Everyone is welcome and discussion will follow! We will meet, as usual, in SN 4068 at MUN at 8 PM.

Here is a short description of the film via TopDocumentaryFilms: 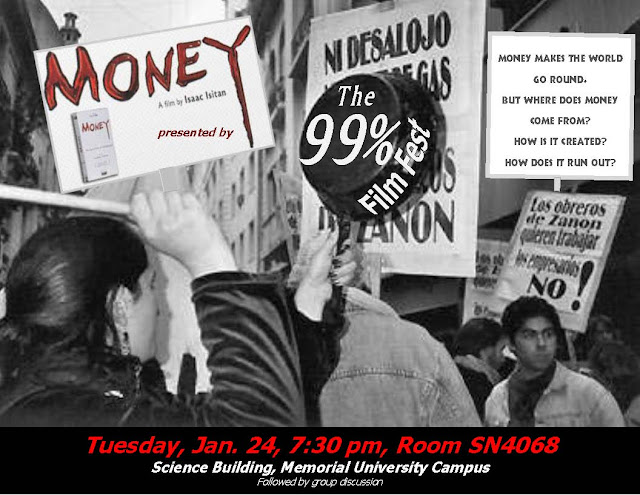 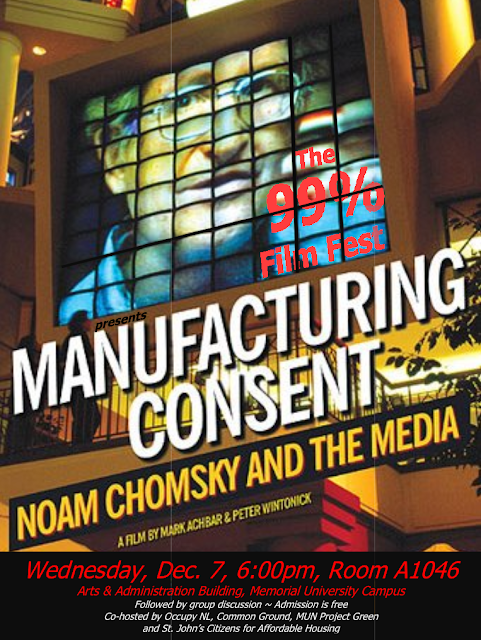 "Who's Counting" presented by the 99% Film Fest.


The second film of the 99% Film Fest is the NFB produced film "Who's Counting? Marilyn Waring on Sex, Lies and Global Economics" by Academy Award winning director Terre Nash.  The film will be shown on Wednesday November 30 at 6 pm in the MUN Arts & Admin building room A1043.  Admission is FREE.  A group discussion will follow.


Update:  If you missed the screening, the film is available for free streaming here. 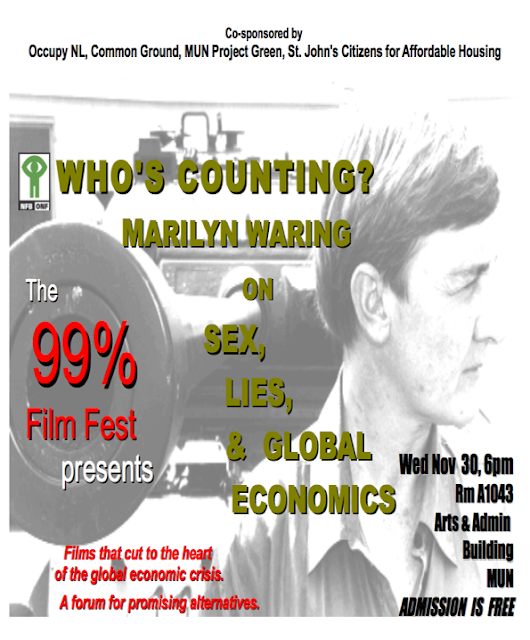 The first film of the 99% Film Fest is the Academy Award winning "Inside Job".
Wednesday November 23 at 6 pm in the MUN Arts & Admin building room A1043.
Admission is FREE. The film will be followed by a group discussion. 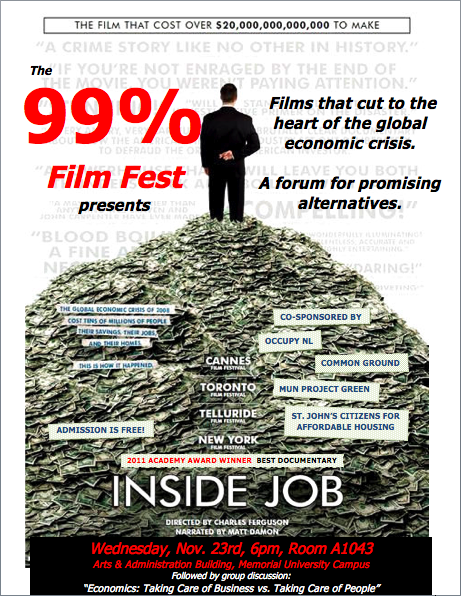 On Tuesday, Nov. 8 MUN Project Green will be showing the documentary 'The Corporation', a film that looks into the dominance of the corporation in today's society by considering it as a person, evaluating its behaviour towards society and the world much like a psychiatrist would evaluate an ordinary person.


Everyone is welcome and admission is free! There's going to be lots of popcorn, but please bring your own bowl!

There is a new film series taking place at MUN starting on November 8th.

MUN Project Green film screening — The Corporation
Date(s) - 8 Nov 2011
6:00 PM - 9:00 PM
Location TBA
MUN Project Green will be showing the documentary, The Corporation, a film that looks into the dominance of the corporation in today’s society by considering it as a person, evaluating its behaviour towards society and the world much like a psychiatrist would evaluate an ordinary person. Everyone is welcome so come and join us! There’s going to be lots of popcorn, but please bring your own bowl!
Check MUN Project Green’s facebook page
at 2:18 PM No comments: