Based on the article “Municipal leaders express concerns about fracking” by Christopher Vaughan, The Western Star April 20, 2013


Since there have been no public consultations thus far by Black Spruce Exploration Corp. on their (and Shoal Point Energy’s) plans to conduct hydraulic fracturing on the West Coast of Newfoundland, there has thus been little opportunity to question the company on the health and environmental impacts which may result from such an undertaking. However some information from the company has been presented to municipal leaders at a consultation they were invited to, and thankfully reporter Christopher Vaughan was on site to record what had been said by Black Spruce representative David Murray. Vaughan’s article (subsequently published in The Western Star) has thus brought to West Coast some snippets of Murray’s presentation - a presentation which it appears raises far more questions than it answers. The following is a list of quotes from the before mentioned article, paired with responses that highlight a need for greater information. 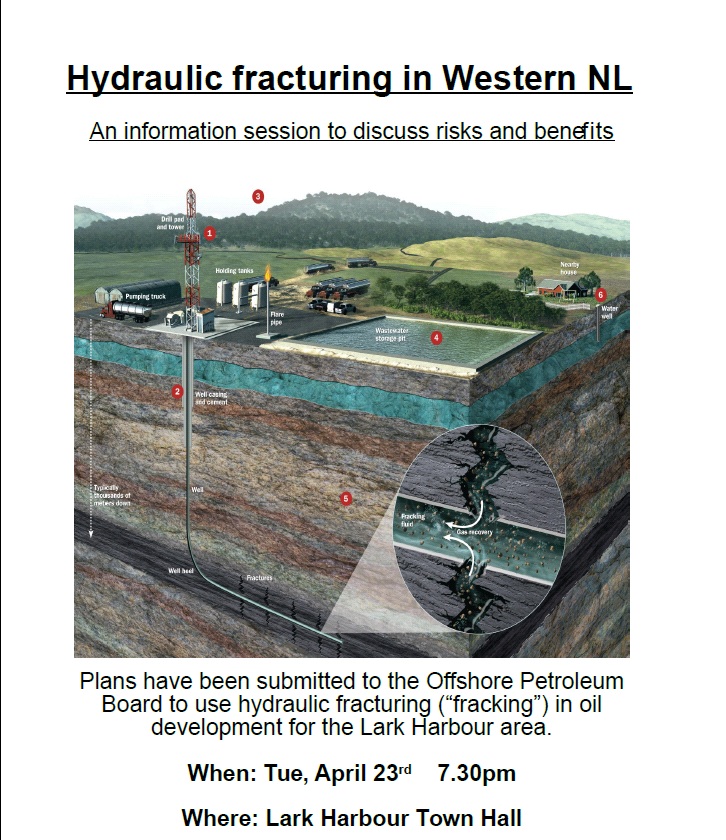 Reposted from the blog of the 4 O'clock Whistle


At 2pm on April 7th about 400 hundred people showed up to take part in a public forum on Shoal Point Energy’s proposal to conduct horizontal slickwater fracturing (fracking) on the West Coast of Newfoundland. Several presentations were given on the subject ranging from an overview of the Province’s existing and environmental assessment process (which appears to contain the potential of producing a biased assessment), to the threat of environmental damage from fracking. Several representatives of government were present, including Tom Marshall, as well as representatives of the Department of Natural Resources and the Canada Newfoundland and Labrador Offshore Petroleum Board. However no representatives of Shoal Point Energy appeared to be in attendance.