The good news: Nalcor finally came through with some concrete numbers on the new rate projection.

The bad news: they are worse than previously reported.

Here is the updated rate projections sent to me by a Nalcor representative (a member of the Nalcor "social media team").

Caution is always warranted when comparing dollar values across time.  However I believe this comparison is valid for the following reasons. (Update:  I have now received confirmation from Nalcor that both projections are in nominal prices and thus are directly comparable. The argument appearing in italics below is no longer important.)

1) In my email to Nalcor (reproduced below) I specifically asked to be provided with updated projections that were directly comparable to the DG3 estimates. The table I was sent is also presented in a way that suggests the numbers are meant to be compared.

3) The table explains the on-first-hearing-nonsensical remarks made by Ed Martin at the press conference when the new cost estimates were released:

"When Muskrat Falls comes into service that's (a monthly power bill increase of) on average about 8 dollar per month to maybe as high as 28 dollars per month - depending on your usage factor - over what was projected at sanction for monthly electricity rates. Once again that depends - the range depends on how much electricity the person uses."


I believe that Martin explained this incorrectly. It does not make sense to offer such a wide range as an average,  but it does make sense to say that the average bill increase varies between $8 and $28 over the projected time period. This interpretation is in keeping with Martin's letter to the Telegram which (misleadingly) only offers a direct comparison to DG3 for 2018.

Press reports from the CBC (here and here) only provide the $8 figure and the Telegram report does not include any rate projection so this story has not been properly explained to the public.

It is interesting to compare the new projections with the DG3 projections for the isolated island option.

The DG3 Isolated Electricity Rate is now lower than the new Interconnected Rate until 2025, after which it is higher.  Muskrat Falls is no longer a clear winner over this time frame, though it probably remains the cheaper option post-2030.

I understand that a response to my earlier question is under preparation.  Here is the question for your convenience:

"I understand that Nalcor is estimating that the new cost estimates will
result in a $8 higher monthly power bill for the "average" customer.  I
would like to see the analysis that derived the $8 figure from the new

cost estimates.  Is that possible?"

Since posing this question there have been some other public statements from Nalcor that have sown confusion among the public. A good example is Ed Martin's letter to the Telegram that was not careful to explain he is using nominal price estimates.  This led to a blog post by Des Sullivan [note: actually written by JM] that has further muddied the waters:

I think it would be a big help if - in addition to answering the question above -  Nalcor released an update of estimated electricity rates in a form directly comparable to this chart:

" Thank you Mr. Baird for another question.

As requested, we've updated the Electricity Rates and Average Monthly Island Residential information based on the revised capital cost update for the Muskrat Falls Project that was released in June 2014.

In our reply to your previous question on July 24, 2014, we noted that forecast electricity bills include all costs of generation, transmission, distribution, capital, operating, maintenance and sustaining capital, including fuel, interest and financing costs, plus Newfoundland Power costs.  All of these items are included in the projected rates. Prior to interconnection Newfoundland and Labrador Hydro anticipates significant capital expenditures to address load growth including a new gas turbine in 2014 and a new transmission line from Bay d'Espoir to Western Avalon in 2017.

At the time of the release of the capital cost update for the Muskrat Falls Project at the end of June 2014, Nalcor stated that the change in the electricity rates are expected to be in the range of about 7% to the average homeowner on the island using electric heat. This is for the 10-year period from 2014 to 2023. It is anticipated that when Muskrat Falls is fully operational and our province is powered almost exclusively by renewable energy sources, rates will stabilize for customers, increasing on average around one to two per cent per year.

Attached is the updated chart as requested.

This response will also be posted on the Muskrat Fall Project website shortly.

18 days ago I wrote to Nalcor with this question:

I received the following reply today. 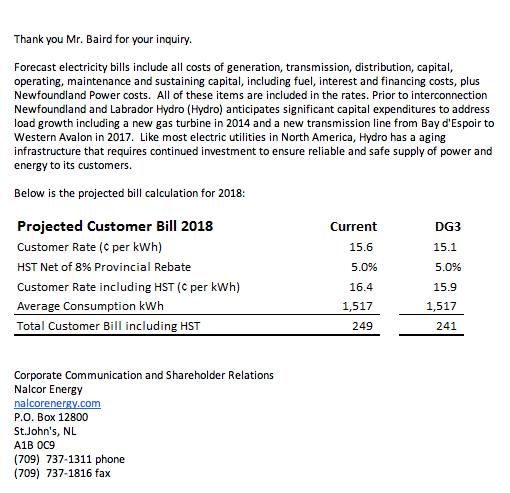 The email is a bit short on details. I would have liked to see how the burden is spread between residential users vs. industrial users, what the projected customer rate is in future years, and how the various parameters (projected fuel cost, interest rates, etc.) have changed since DG3. I think this email clarifies matters a little bit though.


One interesting observation:  they seem to assume that the higher price will have no effect on average consumption. Do they take price elasticity into account in their long term forecasts?