A month has passed since Harper announced his intention to gut Old Age Security to an audience of banking elites in Davos, Switzerland.  The issue has received a great deal of discussion in the media since then,  some informative and some inane,  so maybe it is time to take stock of what we've learned.

Among the more thoughtful and informed pieces is this one by Robert Brown, a retired professor of actuarial science from the University of Waterloo and a former president of the Canadian Institute of Actuaries. Here he addresses claims that OAS is unsustainable:

Email ThisBlogThis!Share to TwitterShare to FacebookShare to Pinterest
Labels: OAS

Food has been incorporated and turned into big business. Occupiers have come to see that we must reclaim our food by demonstrating ways that production and supply can be localized, emphasizing fair practices and sustainability. We all need to eat, but we don't need to eat corporate sh#t.

On February 27, the worldwide Occupy Movement has called for a day of action, Occupy our Food Supply (twitter tag #F27). Occupy NL's food and camp supply committee will take part by hosting a vegan dinner at Harbourside Park (complete with entertainment) at 5pm.

What can you do? Think about the ways corporate food functions based on profit motive, rather than based on the health and well-being of consumers. Consider the food you buy (and where you purchase it) as a political decision. Most of all, get informed and join us! Below are some links to Occupy our Food Supply related sites:

How Do We Make Waves?

This was the question under deliberation at Wednesday night's discussion “Making Waves” with Ryan Cleary on the future of the fishing industry in Newfoundland. The provincial and federal ministers of fisheries, Peter Penashue and Keith Ashfield, were invited to speak but did not attend. Cleary, in his opening remarks, emphasized the lack of planning in this key industry despite thirty years of commissions making numerous recommendations that have not been implemented. After his private member's bill asking for an inquiry into this lag in progress was defeated by a unanimous Conservative majority, Cleary began his own inquiry into these recommendations. Cleary boiled these down to a few that he thought to be the most important:
Cleary then put the topic to the floor for discussion and the public raised many issues with a focus on the fear of the fate of small fishing enterprises caused by the control of big business. These topics included the federal government's inaction on the banning of seals in the EU and Russia; the huge problem of overfishing by large vessels; the commensurate benefits of fish within the 200 mile limit Canada gave to foreign countries for having to implement the limit around Newfoundland, which does not cover the continental shelf and so does not serve its purpose of sustaining migrating fish; Canada's current free-trade dealings with the EU, which will not be publicizing decisions until the deal is made; and the federal government's talk of removing the Fleet Separation Policy, which would hurt smaller fishing enterprises.

But how do we make this change? Government committees have been looking into the fisheries for thirty years and a clear blueprint outlining the future of the industry has yet to happen. All agreed the people of this province need to make their voices heard on this issue. This big business takeover is reversible and our local communities depend on it. If we are going to keep eating fish, doesn't it make the most sense to do it in the most sustainable way, that is, locally? A big business takeover would mean fish were caught here, processed there, and then sent back here to be sold to us. If these companies cannot meet our solid demands for fair wages then we must change the system. Business should be responsible to its employees, not to its shareholders. By buying local, Newfoundlanders could keep small fishermen alive. By crying out against the takeover of big business, Newfoundlanders could lead the way for other small industries everywhere.
One protest makes the government notice, an extended protest might just make them act.

On Sunday, February 26, Jack Harris has organized a discussion panel on OAS. Quoted from his site:

Join me, Jack Harris, your MP for St. John’s East along with fellow Members of Parliament, Ryan Cleary (St. John’s South-Mount Pearl), Irene Mathyssen (London-Fanshawe) and Lysane Blanchette-Lamothe (Pierrefonds-Dollard) for a special town hall.  Join us at the Battery Hotel (Riverhead Room) on Sunday, February 26, to discuss the importance of protecting Old Age Security.  Doors open at 2pm and the discussion will begin at 2:30pm.

The issue of Old Age Security, and the stability of the fund, has been in the media spotlight lately, with the government seeming to indicate that they will raise the age to receive OAS from 65 to 67, and that other changes are also in the works. For more background, see our earlier post "Steven Harper and Old Age Security".
at 2:34 PM No comments:

REPOST (again):
Third time's the charm! Join OccupyNL this Tuesday February 21 at 8 PM for a workshop on fiat currency (rescheduled twice now, but we are persistent!). We will be meeting at MUN in the Science building, room SN4068. Free parking available in lot 15B (map).

Prof. Josh Lepawsky and Lori Heath, Coordinator of the LETS Barter Network and Executive Director of Common Ground, will facilitate a discussion on what money is, where it comes from and how it is created... and how communities can create their own money to provide for local needs.

Check out this short video for a 4-minute backgrounder: 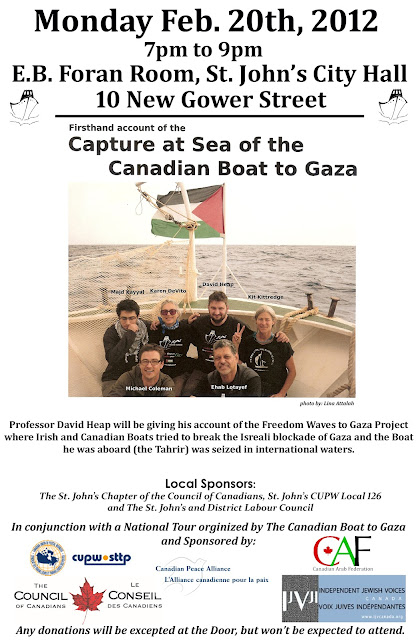 ***updated post with images and video from OccupyNL event as well as photos from our Aussie friends... if you have photos, videos, poetry, etc. that you would like added to this post, please get in touch with us!***

Occupy Newfoundland and Labrador begins a day of events in solidarity with Occupy Art #F12: international day of creative action. Occupy Art events kicked off in Australia, the US, and other Canadian cities. It's a beautiful summer day in Aussie from the look of some wonderful images coming out. If you're going to the events here @OccupyNFLD today, be sure to bring a camera and whatever other artistic supplies you need to get creative! Follow along on facebook and on twitter as the day goes on.

Check out the excellent Telegram article by Justin Brake on Occupy Art day.

What would John Lennon say to Occupy?


This wonderful video was created out of an audio interview with Lennon in 1969. The interview itself is an interesting act of citizen journalism in a way, given that the 14 year old Jerry Levitan snuck into Lennon's hotel room in Toronto to get it.

New issue of The Four O'Clock Whistle is now out, the second installment of the zine from Occupy Corner Brook! Catch up on the first issue here. 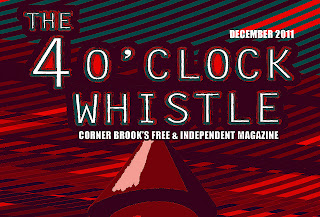 If capitalism sees its own shadow, does it mean we're in for another generation of economic winter?

Mayor O'Keefe and others have been calling for a "new fiscal arrangement" with the provincial government.  It is easy to get cynical about politicians fighting over tax revenue: they want credit for spending, but don't want to get blamed for tax increases.  But the mayor's proposal has merit as a means of reducing income inequality.