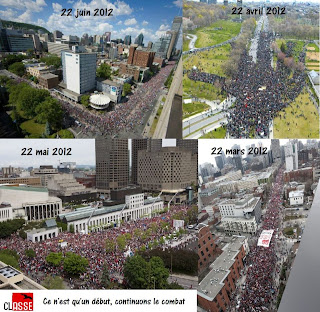 The Maple Spring is important to all Canadians, and not just Quebec. Here's why.

That's why Gabriel Nadeau-Dubois, past student leader of CLASSE, has undertaken a cross-Canada speaking tour to help spread the message of resisting austerity and defeating the stranglehold of neoliberalism across this country.

June 22, as expected, was a massive show of solidarity across Canada (and of course massive amounts of people on the streets of Montreal and across Quebec).

Every month has a 22nd, so here's to ongoing shows of solidarity and support! Check out the global call to resistance on the 22nd of every month.

As of Sept 20th, after the inauguration of Pauline Marois' minority Parti Quebecois government (and the defeat of Jean Charest's government (he was also defeated in his own riding)), the tuition fee hikes have been repealed.  However, the Concordia Graduate Students Association, still fighting for a very realistic goal of free education in the province, along with other student groups such as CLASSE, will show that they are still organized and come out for a demo on Sept 22.

Click here for a refresher on what this conflict is about: The Conflict: 101
Here is a great explanation of the context for the current mobilisation of students in Quebec. Free education is not a new idea, neither is it impossible. In fact, "it was the state’s very own idea on the recommendation of a Royal Commission, a choice that was respected and prized for four decades."

Great recap: Ten Things Everyone Should Know about the Quebec Student Movement.

In response to the emergency law passed, Law 78, people have this to say: Arrest me!

Concordia Student Union General Assembly operates using horizontal decision making like that used by the Occupy movement, and they spearheaded the student strike originating at Concordia. More info here about how this started. View this video on the 8 Myths of Tuition Hikes.

For up-to-date and reliable info on the Montreal student movement, check out the Montreal Media Co-op and Concordia University TV (CUTV) to watch the recap videos and livestream from the student protests. 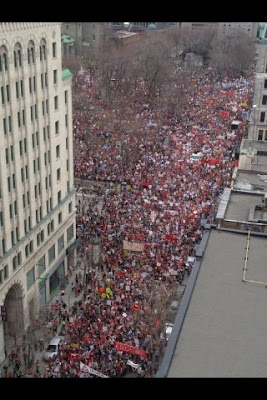 Visit the CLASSE website for more info as well. CLASSE is a temporary national student organization that includes, across Quebec, more than 76,000 members in many student unions from both colleges and universities.

Visit the MobSquad website for info on the campaign against tuition hikes.


Click here for more images from the March 22 demonstrations.

Demands to Concordia's Administration from students on strike

Here's a good overview of what's been happening since March 22.

May 30 -- We are immense (translated from Le Devoir)

June 22 -- Highlights from the Streets of Montreal

Sept 20 -- It's official: Quebec tuition hikes are history (proof that radical movements can win).
at 6:23 PM

This, is awesome. Actually impressed at this. Canadians awaken and look what happens :) TJ