A month has passed since Harper announced his intention to gut Old Age Security to an audience of banking elites in Davos, Switzerland.  The issue has received a great deal of discussion in the media since then,  some informative and some inane,  so maybe it is time to take stock of what we've learned.

Among the more thoughtful and informed pieces is this one by Robert Brown, a retired professor of actuarial science from the University of Waterloo and a former president of the Canadian Institute of Actuaries. Here he addresses claims that OAS is unsustainable:


"Based on the assumption that the cost of living would rise 2.5 per cent a year and that earnings would rise at 3.8 per cent a year (i.e., real wage growth of 1.3 per cent per annum), the Chief Actuary projected that the cost of OAS as a percentage of GDP would be 2.2 per cent in 2007; it would then peak at 3.1 per cent in 2030, then fall (as baby boomers die off) to 2.7 per cent in 2050. He further points out that, if these assumptions prove to be true, each generation of retirees will receive an OAS benefit that will be a smaller ratio of their final pay (the replacement ratio) than the generations before.

Does this indicate that the OAS system is unsustainable? Are we facing a demographic avalanche or a glacier?"
He is referencing a report by the Chief Actuary responsible for OAS (available here).  The numbers quoted above are presented in this nice chart from the report. 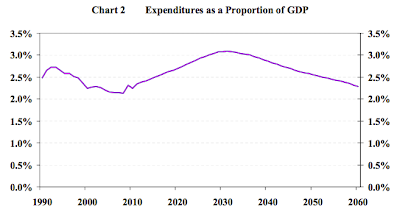 A bulge to be sure, but not the looming catastrophe it has made out to be by the slash-happy Harper Conservatives.  Indeed, a back of the envelope calculation* finds that the required increase in OAS funding could be paid for by raising the GST by 1.5%.  As the Harper government has already cut the GST by 2%, the sustainability of OAS is a question of priorities rather than necessities.
In response to rumours that the government plans to increase the OAS eligibility age from 65 to 67, Brown continues,
"Raising the eligibility age for OAS is regressive legislation. It’s well known that wealthy Canadians live longer than poorer Canadians. Look at a blue-collar worker with less than a high-school education who retires at 65. That person’s life expectancy could easily be around 10 years. If you raise the age of eligibility for OAS to 67 from 65, you remove 20 per cent of that person’s expected benefits. A wealthy Canadian, on the other hand, could just as easily be looking at a life expectancy of 20 years. Thus, moving this person’s age of eligibility up by two years is a 10-per-cent reduction in their benefits."
So raising the eligibility age for OAS hits poor people harder that rich people in dollars per person!  As a proportion of income the impact is far more severe. This is, of course, part of the political appeal of OAS cuts. The willfully ignorant Margaret Wente argues, in an impressive display of double-think, that

"OAS is a relatively small amount of money ($540.12 a month) that gets taxed back as your income goes up."

and in the next breath speaks of the

"tsunami of geezers that’s about to crash on our shores and suck the wealth of future generations out to sea."

And she accuses critics of histrionics! The one-percenter mindset seems incapable of recognizing that this "relatively small amount of money" is the difference between dignity and destitution for hundreds of thousands of seniors. Wente herself acknowledges,

"The reduction in the elderly poverty rate over the past few decades has been called the major success story of Canadian social policy in the 20th century."

but seems oblivious to the fundamental role played by public pensions and social security in this accomplishment.

Another specious argument made both by Wente and the Conservative Party is that OAS is a "war against the young".  But the Conservatives have made assurances that the changes will not affect any current seniors, and will probably not affect anyone over the age of 56, so the burden of these cutbacks will fall entirely on post-boomer generations.  Who exactly is waging a war on the young?  Hiking the OAS eligibility age ten years from now will benefit the old and rich at the expense of the (currently) young and poor.  This  makes political sense of course, because the old and rich tend to vote Conservative, while the young and poor tend not to.

However, it must be acknowledged that OAS costs are expected to rise significantly if not ruinously, and reasonable people may believe that sustaining the program in its current form is not worth a 1.5% GST hike.  How could we reduce program costs while inflicting the least damage?  The Globe and Mail's Rob Carrick offers a suggestion.  As it currently stands, retirees receive full OAS benefits if their (individual) income is less than $70k per year.  The benefit is then gradually clawed back until $110k per year, above which seniors receive no benefit.  This means that OAS benefits are going to seniors whose incomes are well above the norm.  OAS could be cut back without throwing anybody into poverty by lowering the clawback threshold from say, $70k to $35k.  Of course, this would require some sacrifice by the Conservative Party's key supporter demographic, so this plan is probably not to be on the table.

Email ThisBlogThis!Share to TwitterShare to FacebookShare to Pinterest
Labels: OAS

I just can't get over how supporting our seniors is 'unsustainable' but war is?
And maybe the occupation of afghanistan isn't technically a war, but the idea of teaching/forcing other countries to be just like us so that they can start mass consuming and polluting is pretty darn close. We went into Afghanistan and did not teach people how to irrigate their farms better or spend a huge amount of time building wells [ like we claim ], we 'stabilized their economy', imposed a judicial system that they can't afford [ and so don't use, reverting back to their traditional ways, which work fine ], and have sent thousands of bureaucrats to do it, who are locked up in confined areas without access to the public. So basically, this billion dollar Afghanistan effort is hated by Afghans because we are imposing ourselves on them, without even bothering to explain to them why or ask them their opinion in the matter - which no one could do anyway, because barely anyone can even speak an Afghan language!
so basically, for the Conservatives, billions of dollars into a fail plan > seniors well-being?

The cognitative dissonance over fiscal policy probably has something to do with this: http://www.ottawacitizen.com/opinion/seems+care+what+things+really+cost/6229550/story.html

Basically, they don't have a clue how much money their new legislation will cost, they don't care about costs in general. Their reputation as being "fiscally responsible" is nothing but propaganda. Ideological rule, unswayed by "inconvenient" facts, statistics, logic or evidence.

I agree with the article on OAS II and believe it could make a good basis for a statement from Occupy NL resisting increase in the age of eligibility.

I think all money saved with this switch should be added to Cleary's pension. He needs it!